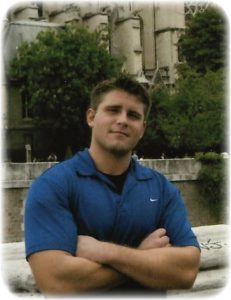 Wesley Trace Earl Richard, 35, passed away on Sunday, April 9, 2017 surrounded by family and friends at the VA Hospital. Wes was born on February 1, 1982 in Little Rock AR. He attended schools in the Dallas area where he also lived and worked for many years.  Wes was a proud member of the US Marine Corp and was honored to serve his country – involving two combat tours during Operation Iraqi Freedom. He was honorably discharged after four years of service.   He was a world traveler and also a student at UALR where he made the Chancellor’s List his first year in college. He was a member of the Kappa Sigma Fraternity at UALR. He graduated from Devry Institute with a B.A. in Computer Science.   He was a gentle soul who loved being with his friends, and family.

He is survived by two fathers, Dr. Terry Richard and wife Rocio and Mr. Charles Smith. He leaves four beloved sisters: Nicolle Trevino-Casey, with recently deceased husband Glenn Casey, Libbi La Mar and husband Kristopher, Emily Marie Richard, Joni Buell with husband Marty and Julie (Boo) Martin with husband Jerry; one brother, John Mark Martin and wife Lisa. Wes also leaves a host of aunts and uncles, nephews and nieces who he cherished. Wes was preceded in death by his mother Ernestina Trevino. The family would also like to recognize Libbi Lamar his family caretaker, Charlotte and BJ Rundell, Barbara Smith, Dr. Jerry and Marion Richard and Austin Rodney for the care and support they provided.

A memorial service will be held at the Arkansas State Veterans Cemetery on April, 17, 2017 at 1:00p.m.     In lieu of flowers, the family asks that donations be made to the UALR Wesley Trace Richard Memorial Scholarship Fund. Please contact Derek Boyce at UALR: 501 416 0611 for information to make your donation. The family sends its prayers to all those combat veterans and their families as well as many refugees who suffer from PTSD. Special thanks to all the medical staff in the MICU and Palliative Care Wards at the McClellan VA Hospital. The care and professional treatment of this combat veteran was simply extraordinary.