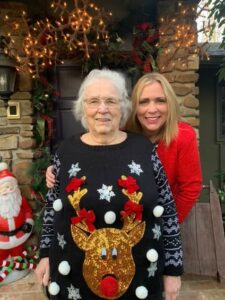 Edith Corinne Butler, born January 26, 1934 to Arthur Herbert and Stella Shannon Odle. She was the third of eight children. Corinne, also known as (Rennie) ventured from Sugar Tree, Tennessee to Detroit, Michigan on a bus with her sister Jean in hopes of going to beauty school. The two sisters were walking down the streets of Michigan and low and behold they saw their oldest sister Marion waving to them on a bus. Their mother, Stella had put Marion on a bus to Michigan to be with her sisters. The three sisters began their journey in Detroit, Michigan setting out on their new adventure. They stayed with their Aunt Frances and Uncle Woodrow at their boarding house in Detroit.  Corinne didn’t anticipate meeting a handsome WWII soldier just recently finishing his service. Horace was staying at the boarding house while working at Ford Motor Company when he and Corinne met. Aunt Frances had arranged for both Corinne and Horace to be present at a local dance. He was 29 years old and Corinne was 16. They married December 23, 1950 and were married for 54 years. They had two children, David Allen Butler and Mary Ellen Butler Reed.

Corinne had a quiet, gentle spirit…

She was one who listened more, spoke less, but always had a good answer when asked…

Corinne was multi- talented in so many areas…

She was put in the category of being the best country cook, and made some of the most delicious biscuits, dinner rolls, chicken and dumplings, Thanksgiving and Christmas dinners, homemade soup and cornbread. Comfort food was her specialty. Whatever meal we would decide on, she was “game” to try it and would make it for us.

Corinne was a talented seamstress who made beautiful clothing, blankets, costumes and crafts. She could crochet the most delicate doilies, smock baby clothing, embroider,  knit, and cake decorate just to name a few of her many talents. She took pride in her craft and was a perfectionist. Anything that wasn’t done correctly needed to be ripped out and redone. Her grandchildren, Austin, Logan and Miranda always had the cutest costumes as she handmade so many of them. Many of their  classmates in elementary school received Meemaw’s “Pilgrim” and “Indian” hats for Thanksgiving and “rocking horse” candy canes for their Christmas celebration.. So many people were blessed by the work of Corinne’s handiwork and creativity.

Corinne found joy in serving her family. She ensured full bellies, and a neat tidy home. Her caretaking nature will always be cherished. Her servant spirit was inspiring and will continue to live on through her children and grandchildren. Although she would never admit it,  Diesel, our black lab was by far her favorite dog and what a blessed dog he was to experience Corinne’s love and daily care.

Corinne will be remembered as a “Detroit Tigers” baseball fan. Her loyalty to the team was obvious as she rarely missed a televised game. Austin, Logan and Miranda will always have memories of that same loyalty when she attended the countless football, baseball, basketball, soccer games and dance recitals to support them.

Corinne kept her mind sharp with crossword puzzles, sudoku or cryptoquote puzzles on a daily basis. She had incredible problem solving abilities regardless if it was a puzzle, a sewing pattern, or spontaneous project. Corinne was the “brains” of the family and everyone depended on her to remember the important things and dates. Her knowledge and “quick wit” might possibly stem from her love of the tv show’s “Jeopardy” and “The Price is Right”.

We will never watch a “Hallmark” movie without thinking of Corinne. She loved watching them every day! She treasured a good “love story” movie with a happy ending.  Corinne has probably watched every Hallmark movie and might recommend you watch “Unleashing Mr. Darcy” as it was her favorite.

Our family was very blessed and privileged  to have enjoyed Corinne in our home for over fourteen years. We saw her every day and couldn’t have imagined our family any other way. One funny thing which will always be remembered was our kitchen which was actually  “Corinne’s” kitchen. Every item was placed where she needed and wanted it to be and as her grandchildren grew up asking “Meemaw, What’s for supper?”. It was Meemaw who they turned to for answers about supper. She was definitely the cook in the family.

We love you Momma/Meemaw and hope you enjoy being home with our Lord and Savior. I’m sure Dad was waiting for you early Monday morning and asked, “Rennie, what took you so long?”

We will treasure your memory always.