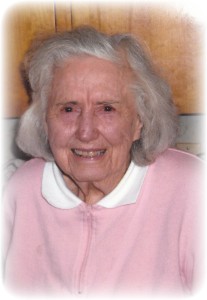 Ermal Jean Whitney, 95, of Sherwood passed away on Thursday, October 22, 2015. She was born on October 5, 1920 to the late Forest and Etta Blakey of Heber Springs, Arkansas. Ermal was preceded in death by her parents; her husband, Edward Whitney and one daughter, Patricia Whitney.

Ermal had a love for animals and enjoyed caring for them. She also liked to garden when she could but her family was her greatest joy and treasure.

Funeral services for Ermal will be on Monday, October 26, 2015 beginning at 1:00 p.m. at A Natural State Funeral Service Chapel. Interment will immediately follow at Rest Hills Memorial Park in North Little Rock. Family will receive friends starting at 11:00 a.m. on Monday at the funeral home.