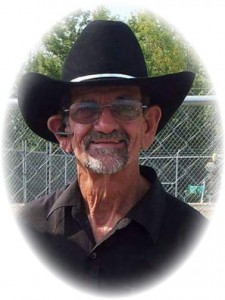 Alfred Berry Wyles, 69, of Cabot lost his battle to pancreatic cancer and went to be with his Lord on January 7, 2016 with his children by his side. He was born on September 5, 1946 to the late Berry Obil Wyles and Opal Lillian Dean Wyles in Little Rock, Arkansas. He is also preceded in death by the love of his life, Betty Gail Powell Wyles; his son, Jeffery Dale; his beautiful granddaughter, Kaitlyn Nacole Wyles; and three brothers, Danny, Joe and George.

He was a cowboy at heart and spent many years enjoying riding and showing horses with his family. The familiar sound of him hollering at Cinder as they rounded the arena in speed is known to many. He also attend Oklahoma Horseshoeing School, he was still shoeing for friends and family just last year. Al also enjoyed coon hunting with his son Mark, best friend, Jim Woods, and Brian Spears that trio spent many nights in the woods listening to the sound of Al’s black and tan hounds. Who according to Al were the only breed to run, he raised top of the line black and tans for many years.

Visitation will be held on Sunday, January 10th from 6 to 8 p.m. at A Natural State Funeral Service Chapel. Al will be laid to rest on Monday, January 11th at 10 a.m. at McGinty Town Cemetery in Greenbrier, Arkansas with full military honors. Arrangements were entrusted to A Natural State Funeral Service 2620 West Main Street Jacksonville, Arkansas 72076. www.anaturalstatefuneralservice.com