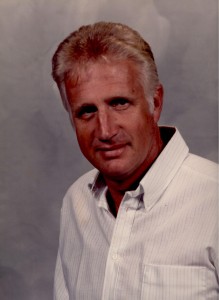 Erich L. Stocker, born June 24, 1939 in Philadelphia, PA to Lydia and Ludwig Stocker. He is survived by his wife, partner and best friend of 33 years, Francine Le Brant-Stocker. His two sons, Derek and Shawn; daughter, Kim along with seven grandchildren. Three sisters, Inga, Sandy and Rebecca (Doris deceased). Erich was the ‘big brother’, and he was adored and loved deeply by them.

He grew up in Hollidaysburg, PA. After high school, he spent two years at Philadelphia Bible College.

But he wanted adventure…..

In 1959, he joined the Air Force. He worked in supply, flew on AWACEC121’s and then his longest field, C-130 loadmaster. He spent 8 years in Anchorage, Alaska.

One of his most memorable missions was to transport a polar bear to a zoo in Massachusetts. That was exciting for him. He was in the cargo compartment the entire trip! His last years he was a Standard Evaluator, certifying other loadmaster performances.

In 1986, he retired as a Master Sergeant after 26 years of service.

But he never stopped working….

He had a very short stint working in shipping at Target before a 6 year career at Central Flying Service where he became Manager of refueling (entire commercial airlines).

In 1992, he purchased a auto pin striping decal/ground effects business. He called it Auto Graphics Plus. It was a one man operation. In recent years he spent Monday’s in Pine Bluff at dealers Trotter and Smart. They respected him and admired his quality work (it isn’t easy to put a pin stripe on a car/truck and keep it perfectly straight).

He loved all of his and Francine’s horses, as well as the many dogs and cats they had thru the years.

Francine helped Erich to learn to ride English and jump obstacles. In 1993, he was Long Stirrup Champion on their beloved ‘Twist of Fate’ (Sable).

Kiwi is his parrot. For 12 years, he sang Happy Birthday and Rock –A- By-Baby every night before sleep. Francine joined them.

He loved golf, exercising at the base gym, browsing stores.

Football was enjoyable for him. Francine would watch it with him in recent years which added to the fun.

He was a Loving, Caring, Compassionate man, and he will be greatly missed!

Arrangements will be private.

Please make a donation in his name to an animal rescue organization of your choice, as Erich was a great lover of all animals.