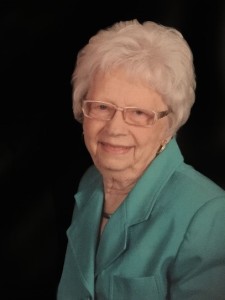 The oldest of two children, Gladys was born on November 8, 1931, in Howard County, Arkansas to William Otis White and Ruby McBay White. She graduated from Lockesburg High School in 1949.

She married her high school sweetheart Nelvin E. Friday on May 21, 1949 in her parents’ home in Lockesburg where they lived for the first year of their marriage. In 1950 they moved to Taos, New Mexico where Nelvin worked in a lumber mill. Nelvin joined the Air Force in 1951 and served at Amarillo Airforce Base as an aircraft instructor during the Korean conflict. Both of their children were born on Amarillo Air Force Base. Gladys attended Amarillo Jr. College and graduated from Northwest Hospital School of Nursing as a registered nurse. She was employed by High Pains Baptist Hospital and Northwest Texas Hospital for twenty-five years. Upon retirement in 1996 she and Nelvin moved to Cabot, Arkansas.

Around the age of 14 she committed her life to God by accepting Jesus as her Lord and Savior. While in Amarillo she invested her life through Eastridge Baptist Church and her family. At the time of her death she was a member of Mt. Carmel Baptist Church in Cabot.

In lieu of flowers, memorial contributions may be made to the Myeloma Institute of the University of Arkansas for Medical Sciences, the American Cancer Society, or the charity of your choice.