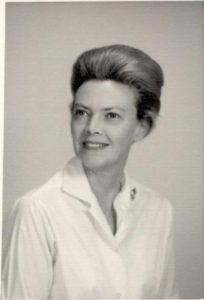 Jean Harney was born March 21, 1922 in Fredonia, New York.  She passed away on August 19, 2016. She graduated from the University Of Rochester School Of Nursing in 1945. In 1967 she received her Masters of Public Health Degree from the University Of NC School Of Public Health.  Jean was the night administrator of Arkansas Children’s Hospital in 1974 then continuing on to teach nursing at the University of Arkansas for Medical Sciences.  She was one of the first five nurses to become a nurse practitioner in Arkansas.  Following this she went to the University of Central Arkansas as an Associate Professor of Nursing where she remained until her retirement in 1987.

She had a lifelong love of travel and visited all seven continents including Antarctica at age 79. She was a devote of duplicate bridge and belonged to the American Contract Bridge League.  She loved to read, knit, cook, and had a lifelong love affair with dachshunds, and was an avid Razorback fan.

Jean was a member of the American Nurses Association, The National League for Nursing, Sigma Theta Tau, the International Honors Society of Nursing and was a D.A.R.. She was proud of being a descendent of Dr. Benjamin Waterhouse, who developed the small pox vaccine in America.

Memorials may be given to the Nursing Scholarship Committee at UCA, or the Humane Society.

A memorial service will be held on October 13th, 2016 at 3:00 p.m. at the Presbyterian Village in Little Rock.  She will be interred in Fredonia, New York.