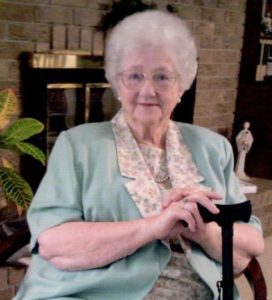 Dorothy Lee Carelock-Moss, 87, of El Dorado went to be with her Lord and Savior on Monday, October 3, 2016.  She was born to the late Cooksey Lee Carelock and late Vera Mae McGaugh on July 8, 1929 in El Dorado, Arkansas.  She is also preceded in death by her husband, Harmel Eugene Moss.

Funeral services will be held on Monday, October 10th at 11:00 a.m. at Bethel Chapel Assembly of God, 1832 Parkers Chapel Road, El Dorado, Arkansas 71730 with Brother Steve Moss officiating.  Visitation will be held at the church from 9 to 11 a.m.  Interment will follow immediately at Old Parkers Chapel Cemetery.

The family wishes to extend a special thanks to the staff at Lifetouch Hospice, Dr. Pam Schonefeld and Dr. Donna Zahniser.