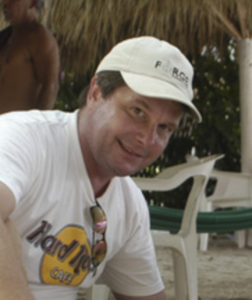 Joe Loftin Smith of Little Rock, AR escaped the bonds of this earth peacefully for a better place September 29, 2016.  Joe Loftin was born on January 18, 1962 in Stillwater, OK.  It was an angry, cold and snowy day unlike September 29.  Services are pending.

While Joe’s life started in Oklahoma he soon was in Arkansas, first Jacksonville then Little Rock.

Joe graduated from Parkview High School and after a brief adventure as a musician enrolled in Arkansas Technology Institute.  He graduated in two years and went to work in the media department of UAMS.  He soon was hired away by Arkansas Children’s Hospital where he worked for most of the rest of his working days becoming department head of Media Services.  His career ended after 20+ years due to medical problems.  Later he worked with Janet Warlick at Camera Work and in legal media until medical problems forced him to stop.

Joe was an outdoor person and loved to hike, camp, fish, ride bicycles, and most of all – sail.  He joined a local sailing club, bought a sailboat and became a champion racer.  It remained his passion the rest of his life.  In later life he painted, did woodworking and continued his photography.

He was preceded in death by his grandparents, Joe Wade and Lois Smith, William A. Loftin, Jr. and Marie Carter Loftin Shane.

Those that knew Joe would tell you of his unending talents, his fervor for them and those around him that he loved dearly.