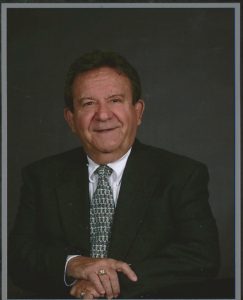 Lindell Ray Bennett, 82 of Cabot, went to be with his Heavenly Father and Savior on October 6, 2016. Lindell was born on July 19, 1934 to Walter James and Anna Mae Bennett in Wetumka, Oklahoma. He moved to Okmulgee around the age of six and graduated from Okmulgee High School in 1952.  After high school, his career in telecommunications took him all around the world to such places as:  Guam, Azore Islands, Puerto Rico, Philippines, Africa, Hawaii, and Portugal.

On September 5, 1964, Lindell married Linda Kay Nichols and they began their lives together.  They continued to travel with his job living in Texas, New Jersey, California, Hawaii, and Ohio before finally settling in Cabot, Arkansas in 1970. After 25 years with General Telephone & Electric Corporation (GTE), Lindell retired in 1995.

Lindell loved the Lord with all his heart, soul, mind, and strength and enjoyed serving in his church. Always with a servant’s heart, he served as a Sunday school teacher, Royal Rangers leader, Trustee, Usher, or anything else needing to be done at his church.  He was an active member of McArthur Church in Jacksonville, Arkansas.

In his free time, Lindell enjoyed gardening, camping with his family, bird watching, and working in his yard.  A loving Husband, Dad, and Papa, Lindell’s family was always a priority, so any activity with his family was how he chose to spend his time.  During his retirement years, Lindell and Linda enjoyed traveling and caring for their grandchildren.

Visitation will be Wednesday, October 12, at 10:00am at McArthur Church, 3501 John Harden Drive in Jacksonville, with a memorial service immediately afterward at 11:00am. Interment will follow at Mount Carmel Cemetery in Cabot.