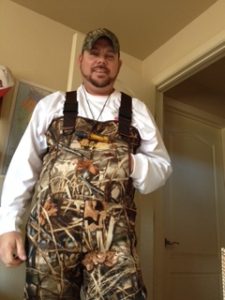 Shawn Richard Miller, age 40 passed away October 17, 2016 in Acworth GA. He was born on March 19, 1976 in Dumas, Arkansas and raised in Pine Bluff, Arkansas before moving to Georgia.  He had resided in Rogers, Arkansas for several years.

Shawn is preceded in death by his father Richard W. Miller and his grandmother Joan Chidester.

Shawn is survived by his mother and stepfather Dolores and Larry Stegall, his children Zacharie, Faith, and Mackenzie, one grandson Bently, a brother Scott, nephews Nicholas and Michael, grandparents James Chidester, Mavis and Murel Kennedy and numerous aunts, uncle and cousins.

Shawn worked construction installing guttering and siding. He loved the outdoors, fishing, hunting, boating and camping. Shawn was well liked with many friends. His likable personality was a gift that drew many people close to him. Shawn’s life ended early on this earth but his spirit will live forever in heaven. Goodbye for now Shawn.

Graveside services will be held on Thursday, October 27, 2016 at 2:00 pm at the Grady cemetery in Grady, Arkansas. Deacon Ernie Gallegos will be officiating.