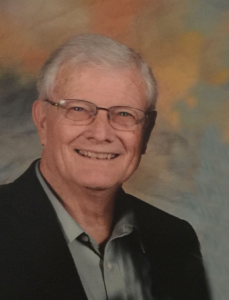 Nelvin was born on October 25, 1930, in Antoine, Arkansas to Sidney Albert Friday and Edith McWhinney Hutson Friday. He graduated from Lockesburg High School in 1950.

He married his high school sweetheart Gladys White on May 21, 1949 in her parents’ home in Lockesburg where they lived for the first year of their marriage. In 1950 they moved to Taos, New Mexico where he worked in a lumber mill. Nelvin joined the Air Force in 1951 and served at Amarillo Airforce Base as an aircraft instructor during the Korean conflict. Both of their children were born on Amarillo Air Force Base. Upon discharge he taught in the same school for over two years as a civil service employee. In 1958 he was employed by Mason Hanger under the Department of Energy Security Administration’s Pantex Plant near Amarillo, Texas. Most of these years were served as an engineering technician in research and development. He retired in 1993 and he and Gladys moved to Cabot, Arkansas in 1996.

His greatest joy was to be counted a child of God. He committed his life to Him through God’s son, Jesus at the age of 12 and served Him many years through Eastridge Baptist in Amarillo. He spent his retirement years striving to honor God through Mt. Carmel Baptist Church in Cabot.