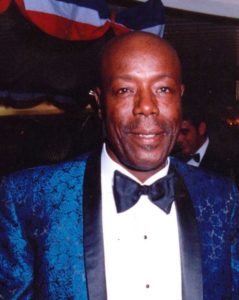 Robert “Bob” Laramore died peacefully in his home after a long battle with cancer in Jacksonville, Arkansas on Thursday, December 22, 2016 at the age of 86. Robert was born November 22, 1930 in Brooklyn, New York to Rias and Viola Laramore. He was among the oldest of four siblings. A veteran, he enlisted in the National Guard 1948 at the age of 17 and transferred to the Air Force in November 1949, Service in June serving honorably during the Korean Conflict.

Robert moved to Chicago in the early 1960’s and married Beverly June Heath, on March 28, 1963 at the age of 33, and two daughters Victoria Ann and Kimberly Janeen. Beverly preceded Robert in death after decades of friendship. Robert had one son, Aaron Craig Laramore, born to CaLeara. Fiercely independent and a strong believer in self-sufficiency, Robert held foreman positions with Zenith and the Schulze & Burch Biscuit Company and was a Yellow Cab driver. Over the years, he ran a small restaurant, a bowling alley and most successfully his own transportation service, Laramore Transportation. Bob spent over 30 years of his life as a Chicagoan; he was an avid bowler and loved ice cream, but his most enduring quality was his down to earth nature. He was a man who could talk with anyone and who would always tell you what he thought, whether you liked it or not.

On June 16, 1994 Bob married Ernetta Jones, after proposing during a favorite bowling tournament in a public announcement before the entire crowd. Robert sold his company and retired with Ernetta to Little Rock, Arkansas, making a home there with Ernie and daughter, Tasha Jones Atkinson. A Member of St. Mark Church, he remained active, serving as a Fleet Inspector for the City of Little Rock and continuing as long as he possibly could even in the face of his illness. Robert and Ernetta enjoyed 22 years of marriage together. He will be deeply missed by family and friends.

Visitation will be Thursday, January 5th from 8:30 to 10:00 am at St. Mark Community Church in Jacksonville with service following. Interment is at the Arkansas State Veteran’s Cemetery, North Little Rock at 1:00 pm.