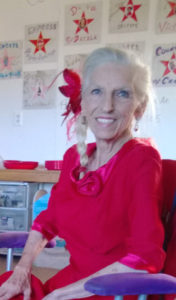 Alva Fay “Bitsey” McAlexander, age 71, of Newark, passed away on January 21, 2017. She was born in Santa Ana, California on February 22, 1945. She was preceded by her father, Tharon Albert Bailey and her mother, Azlee Wanda Funderburk.

Bitsey was an accomplished artist and shared her love of art by teaching students of all ages. She was queen of the local chapter of Newark Hummingbirds Red Hat Society. Bitsey touched many lives and will be dearly missed by all.