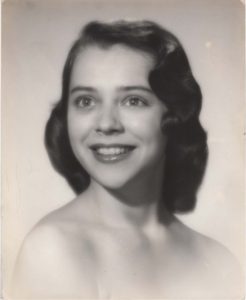 Charlotte spent most of her life in Memphis, with ten years in Southern California. She was born in Memphis on June 26, 1939. As a young girl, she took to singing, acting in musicals, playing the violin and clarinet, and performing ballet. In the summers, she enjoyed swimming and canoeing in the Spring River at Camp Miramichee in Hardy, Arkansas.

Charlotte graduated from Central High School in 1961. She went on to obtain a degree in Speech and Drama from Memphis State University. While at MSU, she was a member of the Alpha Gamma Delta Sorority, won the title of Miss Fire Prevention, and performed with lead roles in such musicals as The King and I. After college, she worked for several marketing companies, and most recently worked at the Pink Palace Museum.

Singing in musicals and church, to uplift and bring joy to others, was Charlotte’s passion in life. Heaven’s choir of angels has gained a beautiful voice! As a girl, Charlotte regularly performed at Calvary Episcopal Church with her father and brother, and later in the choir for Handel’s Messiah. She was a soloist at various churches in California and at Holy Apostles Church in Memphis.

Charlotte is survived by her husband Fred Zambroni, her son James Westbrook and daughter Julia Johnson, her grandchildren Kaden and Shelby Westbrook, and two brothers Marshall Jr. and Charles.

A memorial service to celebrate Charlotte’s life will be held at Calvary Episcopal Church, located at 102 N 2nd Street in Memphis on January 13th at 1 PM, followed by a brief burial ceremony at Elmwood Cemetery. Flowers or donations in her memory can be sent to Calvary Church.