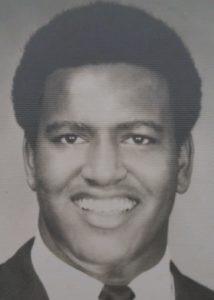 David L. Lyons, Jr., 63, of Jacksonville, was born September 20, 1953 to Florence and David Lyons, Sr. in Little Rock, Arkansas. To those who knew and loved him, he was Duke. Duke went home to be with the Lord Thursday, December 29, 2016. He was preceded in death by his parents.

Duke accepted Christ as a young boy at Howard Street Church of Christ in Little Rock. He attended Harris Elementary School and Harris High School in McAlmont until integration sent him to Jacksonville High School, where he graduated in 1971. He attended the University of Arkansas at Pine Bluff (formerly Arkansas AM&N) where he played football. He previously worked for Southwestern Bell Telephone Company.

Duke had a love for football, once playing on a semi-professional team in Texas. He loved the UAPB Golden Lions, and when his son played there, he was in his element. Duke also loved to fish. Many days he could be found at one of his favorite fishing spots, Lake Conway or Faulkner Lake. Duke spent over 30 years in the car sales business, and he enjoyed the interaction with customers and co-workers, many of whom became friends over the years. Duke had the biggest heart; if he could find some way to help another person, he did so with genuine care and a huge smile. There was no doubt that Duke loved his family and he loved God.