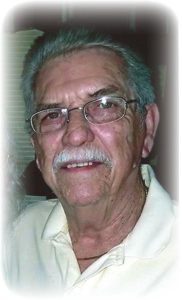 Kenneth L. Harrison, 74, of Hot Springs, Arkansas passed from this life on Friday, January 27, 2017. He was born on November 19, 1942 to the late William and Leoti Harrison in Jackson, Ohio. Ken served three tours in Vietnam in the United States Army and was a member of the Hot Spring VVO. He loved traveling in his camper and joking with his friends and family. Ken was known to be a very giving and generous man who was loved by all.

He is survived by his wife, Lavonne Mays; five children, Michael, Karen and Robert Harrison, Bruce and Ray Mays; one grandchild, Brigitte Harrison; one sister, Rose Obrien, and numerous friends. His is also preceded in death by his five brothers.

Funeral Services will be held on Monday, February 6, 2017 at 10:30am at A Natural State Funeral Service, 2620 West Main Street, Jacksonville, Arkansas with visitation from 9:30-10:30am. Burial will follow with military honors at the Arkansas State Veterans Cemetery in North Little Rock, Arkansas.