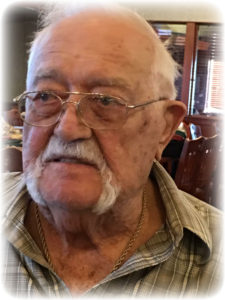 Arley C. Overstreet, 94, of Hot Springs, Arkansas passed from this life on February 13, 2017. He was born in Union County, Arkansas on August 25, 1922 to the late Rufus and Myrtie Overstreet. Arley enjoyed being on the lake and fishing in his free time. He worked as a conductor for the Rock Island Railroad Company for over thirty seven years.

A visitation will be held from 1-2 pm on Saturday, February 18, 2017 at A Natural State Funeral Service in Jacksonville, Arkansas with burial to take place on Friday, February 24, 2017 at the Arkansas State Veterans Cemetery in North Little Rock, Arkansas.

In lieu of flowers the family asked for donations to be made to the Fellowship Cemetery foundation at Fellowship Baptist Church 6476 Hwy 151 Dubach, Louisiana 71235.