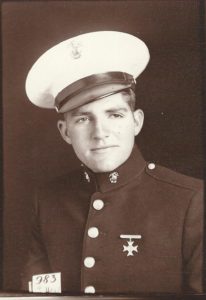 Jack Elliott Davis, 93, of Enola, Arkansas passed from this life on March 2, 2017. He was born in Stephens, Arkansas on June 8, 1923 to the late Bryant Earl and Marguerite Elliott Davis. Jack was an avid trout fisherman, Razorbacks fan, and loved God. He served during WWll in the United State Marines with the Second Marine Division.

Jack is also preceded in death by his sister, Betty Lou Brazealle. He is survived by his loving wife of 66 years Marilyn M. Davis; two children, Matthew Davis (Cathy) and Robin Whitten (Bill); three grandchildren; six great-grandchildren; one sister, Rita Waller; and a host of other family and friends.

In lieu of flowers the family asks for donations to be made to the First Methodist Church 605 W 6th St, Mountain Home, AR 72653 or to the First Baptist Church in Stephens, Arkansas.

A Memorial Graveside Service will be held on Friday, March 17, 2017 at 10:00am at the Arkansas State Veterans Cemetery in North Little Rock, Arkansas.