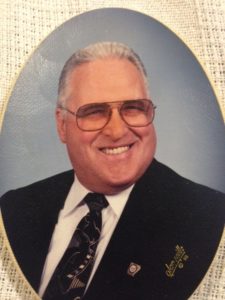 William “Darrell” Lainhart, age 81, of Sherwood, Arkansas, passed away on Thursday, March 23, 2017. He was born on February 23, 1936 in Hamilton, Ohio the son of William A. Lainhart and Zula Peters Lainhart.
Darrell is preceded in death by his beloved wife Mattie, his parents, three brothers and four sisters.
He is survived by his son and daughter-in-law, Rickey and Sindy Lainhart of North Little Rock, Arkansas and his daughter and son-in-law, Julia and Shawn Butler of Sherwood, Arkansas; six grandchildren; Anthony Scott Baker, Sara Lynne Lainhart, Lilian Irene Lainhart, Michael Dean Lainhart, Kyle Reagan Butler, Ryan Glenn Butler; two great-grandchildren; Mya Avery Lainhart, Sophia Mae Hope Lainhart; three brothers William M. Graves of Hamilton, Ohio, Donnie Lainhart, of Hamilton, Ohio, Marvin Clyde Lainhart, of Fairfield, Ohio; two sisters and one brother-in-law, Doris Ash of Fairfield, Ohio and Debbie and Steve Moell, of Fairfield, Ohio; several nieces, nephews, and other extended family members and a host of friends.
Memorial services will be held on Saturday, April 1, 2017 at the First Assembly of God Church in North Little Rock, Arkansas at 10:00 am. Cremation arrangements have been entrusted to A Natural State Funeral Service in Jacksonville, Arkansas.
Darrell loved the outdoors, whether he was flying, hunting, fishing, golfing or tinkering on an old car he was in his element when he was outside. Most of all he enjoyed time with his kids and grandchildren. He loved to see them thrive and learn to enjoy nature. His family was the most important thing to him. He doted on his grandchildren and loved them with all he had to give.
Darrell was a hard worker his whole life. As a youth he had a paper route and worked in a bakery before going to school. After school he worked in a chicken house so he could help his mother raise him and his siblings. This instilled a great work ethic in him.
After High school Darrell proudly served his country in the Air Force for 8 years, 2 months, 7 days. He was proud to be a part of the crew who opened the Little Rock Air Force Base. While serving his country in Arkansas he met the love of his life, Irene Mattie Faye Moody at a skating rink. Less than four months later they were married.
After leaving the Air Force he worked and traveled with author, salesman and motivational speaker Zig Ziglar. Darrell was himself a motivating machine for the people who had the pleasure of working for him. He started Investors Indemnity, Inc. where he sold insurance for approximately ten years, he sold cars and several other things before finding his niche in the investment banking business. He helped several investment banking companies grow their business by training their employees. He started Delta Financial Investment in 1983 and added on a mortgage, leasing business. He was very generous to the people who worked for him and to local charities. He worked hard and played hard. He was the best dad and grandfather. He will be missed greatly.
Online guestbook, www.anaturalstatefuneralservice.com