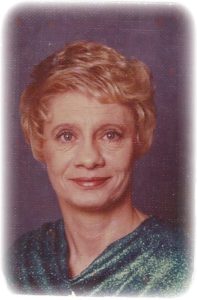 Betty Evelyn McMore Wolff, age 80, of Cabot, Ark. was called home by the Lord on Sunday, April 9, 2017.  Betty was born in Rutland City, Vermont to the late George and Evelyn Higgins McMore and was preceded in death by her husband of over 50 years, James E. Wolff and an infant son.  She is survived by one brother, Bill McMore of North Little Rock, Ark. and sister, Peggy White of Altus, Okla.

Betty lived a full and adventurous life with her five sons Jim (Elaine), George, Steve (Paige), Mike (Mark) and Kenny (Jennifer).  She spent her days chasing eight grandchildren and, eventually, four great-grandchildren who were no match to her feisty spirit.

Though her family was always her top priority, Betty always committed her life to giving back in any way she could.  Betty was a devoted member of the Ladies of Auxiliary VFW post in Jacksonville and even served as a Boy Scout troop leader.  But her service to the world did not stop there.  She was also known for taking in battered women so they had a safe place to call home for the night and, when she was head of the umpires at the local ballpark, she always allowed the young men to leave early on Fridays so their families would have their paychecks in time for the weekend.

At a mere 90 pounds, Betty had her hands tied with a house full of boys, but she was never afraid to pull out the broom to remind them who was in charge- even taking on her military husband!  She survived breast cancer and a double mastectomy and powered through every ailment and challenge life threw her way.

Betty will forever be loved and missed by those who knew her as Mrs. Betty, Momma, Memaw, Grandma or GiGi.

Visitation will be held at Natural State Funeral Home, 2620 W. Main St,  Jacksonville on Monday, April 17 from 6:00-8:00.  A private service will be held for family members only on Tuesday at the Arkansas Veterans Cemetery in Sherwood.