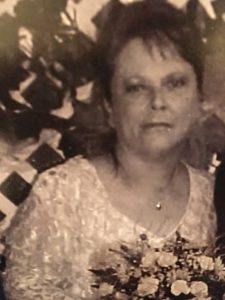 Claudette Hazlett, 65 of Cabot, Arkansas passed away on Wednesday, April 26, 2017.  She was born in Newport, Arkansas on November 11, 1951 to the late Venia Lou Tanner Bailey.

Claudette was also preceded in death by her loving husband Bob Games and one brother R.C. Bailey. She is survived by her son Eric Hazlett and his fiancé Amanda Crawford; one brother Don Bailey (Liz), two granddaughters Victoria Rodriquez and Bailie Crawford; one grandson Hunter Hazlett, two nephews, John Bailey and James Bailey; one niece Deborah Bailey; her cousin Judith Graham; her best friend of over 20 years Terrie Bisbee (Allan) and a host of friends and other family members.

Graveside services will be held at 1 P.M. on Tuesday, May 02, 2017 at Concord Cemetery in Furlow, Arkansas.

The family ask in lieu of flowers that donations are made to help cover the funeral expense by calling A Natural State Funeral Service directly with donation in her honor at 501-982-3400.