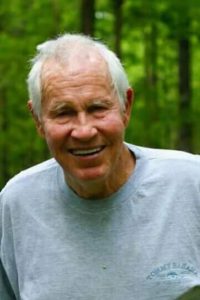 Born and raised on a small farm in Plum Bayou, Arkansas, when asked if he had a football team at his school, he said it was so small that even with all the girls combined there wasn’t enough kids to have a team.  After high school, he joined the US Army and served in the Korean War. While enlisted, he met and married the love of his life Shirley J. Smith. They were married for over 50 years before her passing in 2007.  After returning home, he worked at the International Paper Mill in Pine Bluff.  After he left the Paper Mill, he began a career with Miracle Maid Cookware and later became the District Sales Manager. He retired after almost 30 years.

Leon had a big ol’ mischievous smile that could light up the world.  He loved playing jokes and telling stories.  He had a joke for everything, although not always in good taste, he had a joke for it. And while most of his stories were almost true, you couldn’t help but laugh and forget about your troubles. His ornery smile will be missed.

His favorite pastimes were camping, hunting, and fishing with his family.  What skills he lacked as a hunter, he made up for in fishing. He loved anything he could do with his family, and they will have memories they can forever cherish.  Lastly, he loved Cardinals Baseball and anything Razorback.

We would also like to express our heartfelt gratitude to the Staff at Greystone Nursing and Rehabilitation in Cabot, Arkansas where he was a resident for the last four years. We cannot thank them enough for the care and compassion shown to him.