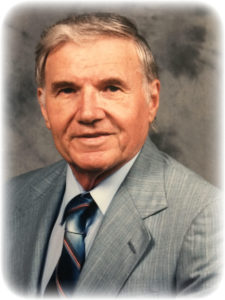 George Lynual Johnson, 89, of Benton, AR passed away on March 30, 2017. He was born on October 20, 1927 in Little Rock, AR to Robert Jeff and Verna Lee (Neal) Johnson. George worked for AMF Cycle Division for 25 years and we loved the custom bikes he built for us when we were children. It truly made us feel special. He loved to squirrel and coon hunt and enjoyed training and showing his blue tick and hound dogs. George was a WWII veteran serving in the US Navy on the destroyer the USS OMBUS and was honorably discharged in 1953. He was a lifelong Baptist.

In lieu of flowers, donations may be made to Baptist Health Foundation, Hospice Home Care or the Arkansas Humane Society.

Graveside services will be held at 11:00am on Friday, April 7, 2017 at the Arkansas State Veterans Cemetery in North Little Rock, Arkansas.