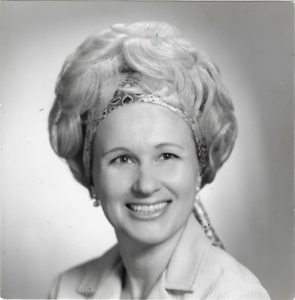 Georgia Lee Perry Helfert, age 86 of Sherwood, Arkansas went to be with her Heavenly Father, Saturday, April 22, 2017.  She was born in Garner, Arkansas on January 3, 1931 to the late Otto W. Perry and Nellie G. Turnbow.

She was a Baptist and her membership was at the Calvary Baptist Church, in North Little Rock, (Rose City) Arkansas since 1953.  She graduated from Beebe, AR high school in 1948. Her first job was at Poinsetta Café in downtown Little Rock as a waitress.  She also worked at Gus Blass department store in Little Rock. Georgia’s first husband, Bill Walden, was a career Navy officer, and they traveled from one coast to the other during the next few years.  In 1957, Georgia moved to Dallas, Texas. She worked at several jobs, a taxi dispatcher, the leading sales representative for Russell Stover Candy Co. and began her career with Southwestern Bell Telephone Co. in 1960. Georgia retired from Bell Telephone after 27 years to pursue other interest. She and Bobbie Males opened Bee Gees Antiques and Collectables in East Dallas. In 1990, Georgia and her husband, Robert, moved to Higden, Arkansas and she opened the Curiosity Shop in Greer’s Ferry. She served as a recording clerk for the town of Higden for several years.

Georgia was preceded in death by her husband, Robert Helfert, three sisters and two brothers, and a beloved dog, Rufus.

In lieu of flowers if you would like to honor her memory please make a donation in Georgia’s name to the Alzheimer’s Foundation of Arkansas, 201 Markham Center Drive, Little Rock, Arkansas, 72205. 501-224-0021