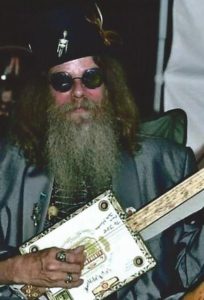 The Heavenly Rock & Roll and Blues Universe increased by one on April 6, 2017. Marshall Golgan, a long-time figure at concerts, and character in his own right was called backstage to be with artists he loved, admired and on whom he became an authority. Robert Johnson, Pine Top Perkins, Chuck Berry, Leon Russell, Duane Allman, Janice, Jimi and John are welcoming him in to the Greatest Concert of All Time. A heavenly band that will beat back the Devil. Marshall is now in the thick of it with his long beard, googly glasses and sweet, sweet smile. Hail, hail Rock & Roll!

Marshall was unique, opinionated, kind, considerate, a true Southern gentleman and an “old soul.” An original hippie who diligently and actively worked to foster world peace and Justice, and a clean and healthy environment. He fought against war and nuclear proliferation. Marshall hated hypocrisy, especially at all levels of government. He was an Army National Guard Veteran who marched proudly in protests against both Iraqi Wars and the Government lies and deceptions that aided their perpetration. He tirelessly demonstrated against the shoddy and collusive Jacksonville Vertac “clean-up” of dioxin and toxic waste that remains to this day a danger.

Marshall made many lifelong friends when he and Sharon owned and operated The Record Museum in Jacksonville, selling used vinyl records, 8 tracks and cassettes where he became an expert in the genre. They rescued numerous cats and dogs and even goats, chickens and people who needed love and help. Marshall was an accomplished craftsman especially in all things electronic. When Marshall completed a job, you knew it was perfect.

Marshall was a man ahead of his time who rightfully knew the healing and helpful value of medical and “recreational” marijuana as a salve for pain, and a positive contributing factor to peace, harmony and creativity.

Marshall ultimately succumbed to inoperable brain cancer he believed was brought on by decades of exposure to dioxin contaminated waste dispersed throughout Jacksonville. He now joins hosts of friends and acquaintances who also had their lives cut short by exposure to the by-products of Agent Orange production in Jacksonville that furthered immoral Southeast Asian war crimes.

Marshall was a devoted husband, father, friend and social activist whose legacy and causes will live on in the just protests of future generations fighting for Truth, Justice and the American Way.