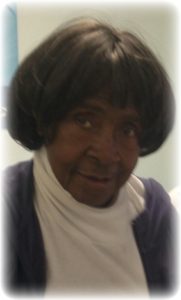 Miss. Bobbie Jean Griffo, “Babs,” 80 of Little Rock, Arkansas earned her wings to be with her Lord and Savior, Jesus Christ on Monday, April 3, 2017. She was born on June 20, 1936 to the late Alex and Della Griffo in Gillett, Arkansas.

Bobbie confessed her devotion to Christ at an early age at the St. James AME Church in Gillett, Arkansas, where she was a faithful and active member until her health declined. She would continue to tithe and pray even after she was not physically able to attend the church. Bobbie raised all six of her children in Gillett, Arkansas where she was employed by Planters & Merchant Bank for over twenty years. She was loved by all who came to know her throughout her life. Bobbie moved to Little Rock, Arkansas in 2011 to reside with her daughter, Deborah and son-in-law Edward where they could take care of her until they were no longer able. All that knew her knew she was “crazy about her boys.”

Bobbie is also preceded in death by her daughter, Sherry Slater; brothers, Robert and Frank Griffo.

Graveside services will be held on Saturday, April 8, 2017 at 10:00am at Mt. Olive Cemetery in Gillett, Arkansas. Funeral arrangements are under the care and direction of A Natural State Funeral Service, 2620 West Main Street, Jacksonville, Arkansas, 72076. 501-982-3400