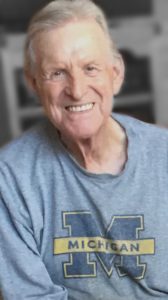 Visitation is scheduled from 6PM-8PM on Friday, May 19. Funeral services will be held at 10AM Saturday, May 20, at A Natural State Funeral Service in Jacksonville, Arkansas.

Al Russell never met a stranger. He needed human company the way other people need water. We never failed to be amazed at the number of friendships he formed with people from all walks of life and in places near and far. He genuinely liked people, and they liked him back.

He was known to most of his large family as Poppy or Papa. Our father was a handsome, charismatic man with an easy laugh and a big smile that was never far from his face. His brilliant blue eyes twinkled brightly when he told one of his terrible puns or corny jokes that could make you groan with laughter. Dad was also a gifted musician with a wonderfully rich baritone. Our home was always filled with the sounds of guitars, pianos, and singing.

He loved working with his hands and spent every possible moment outdoors, working in his shop or out in the garden and flower beds. Dad delighted in making beautiful things grow. He was a hard-working man, spending much of his career as Transportation Director for Cabot Public Schools and later with Pulaski County Special School District. He served many decades in the ministry, establishing and leading churches and emphatically preaching the gospel. It was a work that never stopped; his health faltered but his faith never did.

Anyone who spent even a few minutes with Al Russell would soon learn about the two great loves of his life: his family and his faith. He spoke lovingly and often of his brothers, George, Edward, David, Kenneth, and Danny, and his parents, Bill and Ruby Russell. Even after their divorce, my mother and father retained a precious bond of trust and rich friendship. He formed a special relationship with Betty Thurman that enriched and sustained him late in life.

Dad’s belief in God was the unshakable foundation upon which he constructed a house of love for his family. He grew tremendously both as a man and a father, becoming our role model and our rock. No matter how much we loved him, we always knew that, somehow, he loved us even more. His place in our lives and in those of so many others is one that cannot be filled, but still we rejoice that his passing was peaceful and that he is now in heaven, carefree from all worry and embraced in the loving arms of his family and his God. Of his life and his legacy, we could not ask for more.

May he rest in eternal peace.