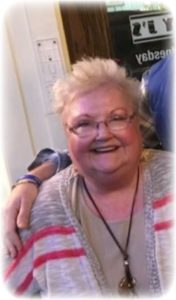 Jean Roxanne Gross, 70, of Little Rock, returned to the One who created her, on June 10th, 2017.  She is survived by her daughter, Amanda Gross and grandson, Patrick Henry Russell, both of Houston, Texas, and her brother, Randy Eoff, and his wife Carolyn, also of Houston Texas, as well as her beloved cat, Meesul.  She also leaves behind many extended family and friends, including Hal Murray, Jim Sharp, and Lisa Williams, all of Harrison, Arkansas.

She was preceded in death by her son, Gregory Scott Gross, a sister, Tina Kay Eoff, her loving Uncle Herman and Aunt Bess Murray, a grandmother, Mary Florence Eoff, her biological parents, Loy Cecil Eoff and Linda Fern Langford Eoff, as well as many aunts, uncles, and cousins including Floyd and Ada Murray, Garland and Edith Gibson, Lowell Murray, and Martha Murray Williams.

Born Loy Jean Eoff of Harrison, Arkansas, on August 23rd, 1946, the nickname Roxanne was derived from a beautiful, sleek, reddish mare, that had a long flowing mane, whom she named Roxy. The horse was a gift bought by her Aunt Bess and Uncle Herman (Murray). She loved to run, play with a mind of her own, and was subject to do anything. Roxanne approached life with zest and laughter.  Simply and beautifully, she was a mother, a grandmother, a sister, an aunt, a friend and a warrior.  As we celebrate and honor her, we keep in mind the words of Dr. Seuss: Don’t cry because it’s over, smile because it happened.

A celebration of life will be held in North Little Rock at the ClubHouse at 123 7th Street on Sunday, June 18th from 1:15 to 3:15.  All are welcome.  She will be interned on June 24th, 2017 at Maplewood Cemetery in Harrison, Arkansas next to her beloved son, Scotty.

In lieu of flowers, donations are requested to the Arkansas State Chapter of the American Foundation for Suicide Prevention at https://afsp.org/chapter/af sp-arkansas/ or The Arkansas Regional Organ Recovery Agency at http://www.arora.org/ or via phone 501.907.9150.