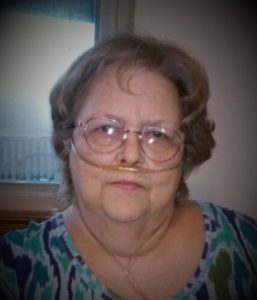 Linda Sue Moore Hurst went to be with the Lord on June 24, 2017 after a courageous battle with Cancer. Linda could be heard telling all around her just to pray and trust the Lord.

Linda Hurst was born on October 28, 1945 in Evansville, Indiana to Suzanne Kornbloom and Ewell Summers Moore.

Linda had a wonderful ethic from the time she was 13 years old and went to work at Baker Drug Store in Stuttgart, Arkansas. During high school Linda met Arnold Hurst when he came to Stuttgart to work as a relief manager for Western Union and the came into the drug store to buy a coke and then came back often. They both attended UCA where she worked for a Chemistry Professor. She likes to joke and say the professor was not worried about her giving out any information she did not know anything about Chemistry. Linda and Arnold were married while at UCA. After graduation Arnold went to work for Ward Bus Company until he was called up for the military where he would spend 32 years in the Air Force. Linda worked at Baker Drug in Conway. There years later Lorrie was born. Linda was a dedicated mother to her three children. Lorrie was a wonderful daughter. Lorrie had a car wreck when she was 17 years old leaving her as a paraplegic. Linda and Arnold were dedicated to making Lorrie’s life as comfortable as possible. They spent 31 years taking care of her every need and fighting to get the equipment, therapy and doctor’s appointment to keep her healthy and happy. Linda’s two boys Douglas Edward and Patrick Chase Hurst were also a source of pride for Arnold and Linda. One of the most important times in Linda’s life was when Arnold gave his life to the Lord.

Linda was preceded in death by her parents Suzanne Kornbloom and Ewell Summers Moore; her husband Arnold Hurst and her daughter Lorrie Hurst.

She is survived by her two sons Douglas Hurst and Patrick Hurst; her brother Lynn (Wendy) Moore; and her mother-in-law Delores Hurst .

A memorial service will be held Thursday, July 6, 2017 at 10:00 A.M. at the Arkansas State Veteran’s Cemetery, North Little Rock, AR

In lieu of flowers the family requests a donation can be made to The Willing Workers Sunday School Class at First Baptist Church, Sherwood, Arkansas.