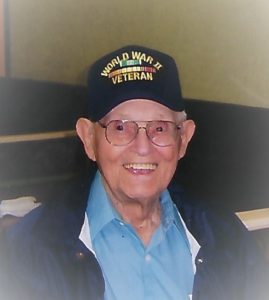 Robert Gray Hall, Sr., 98, of Jacksonville, Arkansas passed away peacefully at home surrounded by loved ones on Sunday, June 4, 2017. He was born in Thessalon, Ontario, Canada, on December 23, 1918 to the late Fred and Nellie Hall.

Robert proudly served in the US Army as a Production Officer, he proudly received a Victory Medal and American Theatre Service Medal. Robert enjoyed Northern Pike fishing in Canada, playing golf, enjoyed talking politics, writing letters to the editor of the local papers and was a candidate for the Second District of the Michigan Congress in 1958. He was a member of the First United Methodist Church of Gravel Ridge and spent his free time as a volunteer for Hospice. He was a member of the American Association of School Administers, American Legion and the Lions Club.

Burial will be on Saturday, June 10, 2017 at Liberty Township Cemetery, Manton, Michigan.

The family would like to give special thanks to the staff at Arkansas Hospice for their amazing care.

In lieu of flowers the family has requested donations to be made to any Hospice organization of your choice.