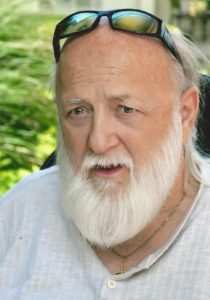 On June 17, 2017, George Frank Bittle II went to join his heavenly father after a slew of illnesses that he had been battling fervently and courageously for the better part of a decade, finally won out.

Born Sep 21, 1949, George was the son of Ruth and George F. Bittle Sr.  George was a native of western New York, where he attended Lancaster High School as part of the class of 1967.  At the age of eighteen, he then enlisted in the U.S. army and served two tours of duty in Vietnam.  Before being honorably discharged, George—who had served with the 11th Cavalry—left with two Purple Heart awards and a bronze star engraved with a V for Valor.

After leaving the army, George had a variety of jobs in a myriad of different places; first, he moved to Texas and worked in the telecommunications field, where he built and worked on now-obsolete cable systems.  Somewhere along the line George also developed a strong interest in motorcycles.  So, in 1983, George moved to Dallas and co-owned Garfield’s, a biker bar that saw a great many colorful characters from the 1980’s biker and counter-culture scene, from most major biker groups in America to Chuck Norris of Walker, Texas Ranger to small rock groups who still managed to bring the house down.  George’s fun didn’t end here; after losing interesting in the bar gig, he moved to Little Rock, Arkansas to manage a pawn shop, where he amassed a great many rare coins and other oddities.   Health issues caused him to quit the pawn business, but even when his health was at its worst, George still went strong and managed to make everyone around him smile.

Despite the fact that he was a quick-talking Yankee with a heavy New York accent, George had a strong Southern streak; among other hobbies, he enjoyed hunting, fishing, barbeque and tequila like a true Texan.

George is set to be interred at Arlington National Cemetery.  His surviving family members include two brothers and two sisters: Bryan, Wayne, Jewel and Gayl; as well as four daughters and a son: Dee, Marcy, Wendy, Kerry, and Scott.  Finally, George has several grandchildren and numerous great-grandchildren to carry on the legacy of his kind spirit.  He will be deeply missed by all.

Cremation arrangements have been entrusted to A Natural State Funeral Service in Jacksonville, Arkansas. Online guestbook available at www.anaturalstatefuneralservice.com