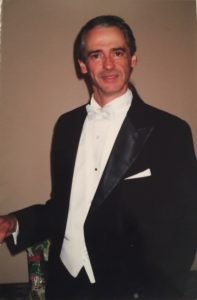 Robert A “Nick” Reavis, 69, of North Little Rock, was originally from Cushing, Oklahoma, but relocated to Little Rock, Arkansas in 1980. He and his wife Toni Reavis owned Steppin’Out Dance Studio for over 25 years. He was a choreographer and competitive national dance champion. Nick was a member of the National Dance Counsel of America, The Lion’s Club, The Mason’s and served his country in the Air Force during the Viet Nam War.

Known for his kind Spirit, humor and unconditional love towards others, his greatest pleasure was his family and spending time with his grandchildren. Nick will be missed by so many former students, family and friends.