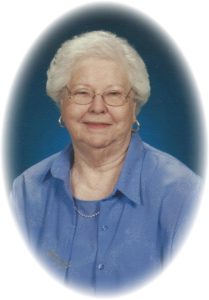 Ada Florence (Haltom) Devine, 87, of Sherwood passed away on Wednesday, October 25, 2017. She was born on March 9, 1930 to Wyatt and Lillian Haltom in Camden Arkansas. She graduated from Camden High School and attended Draughon Business College. Ada was retired from the U.S. Army of Corps of Engineers and was a member of Sylvan Hills First Baptist Church. She enjoyed painting, traveling, and most of all supporting her grandchildren and great-grandchildren in all of their activities.

She was preceded in death by her husband Charles H. (Chuck) Devine and her parents Wyatt Haltom and Lillian Ellis-Haltom.

She is survived by her son Richard Devine and his wife Donna (Avery) Devine of Sherwood; her two granddaughters Stephanie Lauren (Riley) Fincher of Texarkana, Texas and Dana Michelle (Jon) Rodriguez of Sherwood, Arkansas; four great -grandchildren Landon Fincher, Lauren Fincher, Cruz Rodriguez and Maddox Rodriguez. She will be missed by her beloved brother Donald Charles (Doris) Haltom of Ridgeland, Mississippi, several nieces and nephews, her dog Lady and her church family.

A graveside service will be held on Monday, October 30, 2017 at 10:00 A.M. at Bethesda Cumberland Church Cemetery, Camden, Arkansas.

In lieu of flowers memorials can be made to Sylvan Hills First Baptist Church, Sherwood, Arkansas.

Service arrangements have been entrusted to A Natural State Funeral Service, Jacksonville, Arkansas. Her online guestbook is available at www.anaturalstatefuneralservice.com