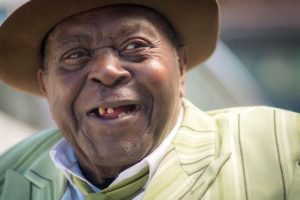 CeDell Davis began playing the guitar and harmonica at an early age. Tragically, he was struck by polio at age ten which left his fingers twisted and mangled, forcing him to develop a new style of playing. His style incorporated using a butter knife in his fretting hand, similar to the way other guitarist might use a slide. As a young man he played with many blues pioneers including Houston Stackhouse, Robert Nighthawk, and Sony Boy Williamson aka Rice Miller. He later moved to St. Louis and continued to make his living at juke joints, fish frys, and house parties. Starting in the 1990s, he experienced a late career surge that eventually found him touring and collaborating with many rock musicians, including members of Pearl Jam, R.E.M., Screaming Trees and others. A stroke in 2005 robbed him of his ability to play the guitar, but it didn’t stop him from performing as a singer. CeDell Davis continued to record and tour with the help from his backing band, Brethren. He was scheduled to headline the Dr. Ross stage at this year’s King Biscuit Blues Festival. CeDell’s latest record, “Even The Devil Gets The Blues,” has been submitted to this year’s Grammy Awards for consideration in the category of Best Traditional Blues Record.

Funeral services will follow at 3 p.m. with interment at Magnolia Cemetery in Helena.

There will also be a celebration of his life at the Whitewater Tavern in Little Rock, Ark., 6-9 p.m. Sunday, Oct. 8. There will be a jam, including many guest musicians who have played with him over the years.