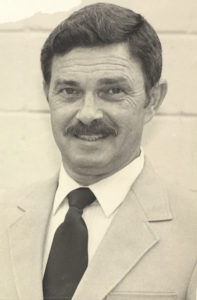 You know how the story begins….he was born to the Hohnbaums- oh, wait!-that is not how his story begins.

Son. In his case, our Dad was born 91 years ago, to the joyful, jovial Gaines family who were hit by tragedy when his birth father, Hoyt Gaines, died at only 37. Sometime later, while working several jobs to feed her five children and a niece, a heartbroken Janet Davidson Gaines placed 4 year old George and his brothers in the Black Mountain Orphanage, near Asheville, NC, to assure their nourishment and shelter at the onset of the Great Depression. Then came the Hohnbaums. George, chosen. Chosen by Richard and Pearl Hohnbaum, who moved the toddler to Rocky Ford, Colorado where George be- came a brother, a friend, a governor, a jock, an aca- demic, a violinist, a wordsmith, an actor, a military policeman, a Merchant Mariner and a world trav- eler.

Romance. Marjorie Louise Kirkhart spotted him. She, an 18 year old, freshmen in college at the  Olympic College in Bremerton, Washington. He, a heartthrob! Kismet. She kicked off her purple pumps, blocked the brake, and forever ensued….

Celebration. Celebration of life service will take place Saturday, October 7th, 2:00 pm at NLR First United Methodist Church, followed by a gathering at the Selhorst home. All who loved George and his family are welcome.

Cremation arrangements are under the trusted care and direction of A Natural State Funeral Service, 2620 West Main Street, Jacksonville, Arkansas, 72076. 501-982-3400.