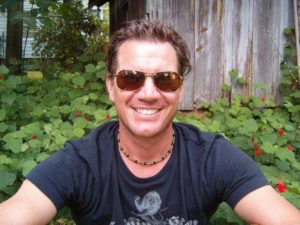 Travis Christopher Meyer, 48, of Carlisle, Arkansas, passed away after a brave battle with cancer at 2:30pm on Saturday, October 14, 2017. At the time of his passing, Travis was surrounded by several close friends and family members at Hospice Home Care in Little Rock. The family would like to thank Hospice Home Care for their amazing care and compassion. Travis was born on December 31st, 1968 to Dennis and Janeen Meyer. He attended Carlisle High School where he excelled on the basketball court.  Travis had the drive and talent of an entrepreneur. Following high school, Travis utilized his passion for the outdoors and landscaping by starting his own company, Meyer Landscaping. Travis would later become a real estate broker and open another business, Charter Realty, while working as an appraiser.  During his spare time, he volunteered for the Big Brothers Big Sisters of Central Arkansas and CARTI (Central Arkansas Radiation Therapy Institute). Travis’ love of cooking inspired him to eventually become a certified chef and open Cinco Entrees in the River-market. However, none of his personal achievements were as satisfying as being a father to his only son, Blake Meyer.  Travis was an extremely proud father who attended Blake’s sporting events and college graduation with the biggest of smiles.  Travis was preceded in death by his maternal grandparents, Janet and James Robins, and his grandfather, Norman Meyer.  In lieu of flowers, memorials can be made to CARTI, Hospice Home Care, or the American Cancer Society.

A celebration of Travis’ life will be held on Saturday, October 21st between 5–7pm at Dugan’s Pub in Little Rock at 3rd and Rock.