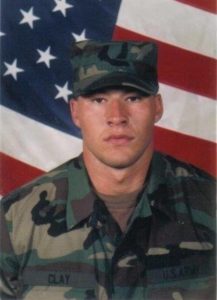 Billy was preceded in death by his sister, Leisa Michelle Clay. He is survived by his parents, Bob and Brenda Clay, his brothers, Jeff Clay and Darin Clay, his nieces Haley Dodson, Nikki Clay, Taylor Thompson, and Ashlyn Thompson and his nephews, Hayden Clay, Dakota Clay and Hayden Thompson.

Billy graduated from Bryant High School, and received a Bachelor of Science in Biology from UCA in 2005 where he was a member of the Pi Kappa Alpha Fraternity. Billy enlisted in the Army National Guard in 2000 and completed boot camp at Fort Benning, GA where he was awarded the title of Soldier of the Cycle. His first overseas tour of duty was in the Sinai in 2001, where he was awarded the Chief of Staff’s Outstanding Conduct Award for risking his life as he saved two of his fellow soldiers. He was again activated for duty in 2004 where he saw extensive combat in Iraq. He received numerous medals for his acts of courage in combat.

Billy was an avid hunter. He loved his duck dog and buddy, Ranger, who preceded him. Billy loved his family and friends very much, but none quite as much as his mother Brenda, whom he called his Angel.