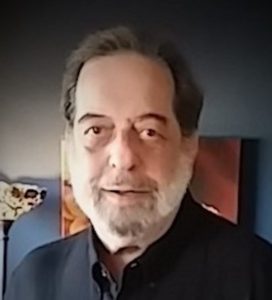 Lyle B. Cook, died of cancer on Saturday, November 4, 2017.  He accepted Jesus as his Lord and Savior, May 2006 and is now in the presence of his Messiah.  He was raised in Chicago, Illinois, by his Jewish parents, Matthew and Idell Cook.

In June 1966, Mr. Cook graduated with a Bachelor of Fine Arts degree in Graphic Design from the University of Illinois, Champaign, Urbana.  At this time, Viet Nam was at a high point, and Lyle joined the Army Officer Candidate School (OCS) in October 1966.   He was part of a team that promoted entertainment to the base such as Count Bassie and many others. In October 1968, he was awarded an acting fellowship to the University of Tucson from the Army for his contribution to entertainment while in the service.

Mr. Cook was an actor, artist and graphic designer.  His paintings hang in private collections in Chicago, St. Louis, San Francisco, New York, Lexington, Kentucky and Spain.  In 1970, he joined the Marlboro design team and for two years created advertising which was shown all over the world.

In 1995, he opened Cook Design group advertising agency with Weyerhauser being a client.  For over 16 years, Mr. Cook created advertising and public relations materials, which appeared in 7 states for his client, Weyerhaeuser.

In 2002 due to medical problems Mr. Cook retired from the advertising business.

A special thank you to my friends Tom Conklin, John Festa, John Roberts.  These three men have been faithful and loyal friends for some 30 plus years.

A special thanks to Registered Nurses Jenna, Arrah, Gail, and Deannie, and to Tricia and Baptist Hospice.