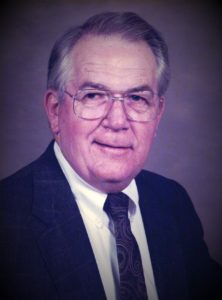 Jonathan Lee Poteet Jr., 86, went to be with the Lord on Saturday, December 9, 2017. He was born on March 14, 1931, in Pine Bluff, Arkansas, to the late J.L. Poteet Sr. and Tennie Albright Poteet. In addition to his parents, he is preceded in death by his first wife, and mother of his children, Peggy Fulton Poteet.  He is survived by his wife of 30 years Ann Poteet of Little Rock, Ark, his brother Jerry Scott Poteet (Ruby) of Pine Bluff, Ark, his children Jonathan Lee Poteet III (Lisa) of Benton, Ark, and Renee Michell Guthrie (Greg) of Lenexa, Kan; two step-sons Bill Stubblefield of Hensley, Ark, and Brett Stubblefield of Ward, Ark; six grandchildren Jennifer Collins (Chuck), Lauren Lameroux (Dustin), Allison Morrow (Scott), Johnathan Guthrie, Sydney Stubblefield (Thomas), and Nathan Guthrie; 4 great-grandchildren Cruz Collins, Sawyer and Jack Morrow, and Emery Lameroux, as well as a host of family and friends.

He was a great man of faith who was an active member of Second Baptist Church, downtown Little Rock, for 56 years. During these years, he served on various committees, had the honor of serving as chairman of the deacons, and was actively involved in the development of Lake Nixon. He was a devoted husband, father, grandfather, and brother who always put his family first. After retiring as owner of Royal Business Machines in 1999, he enjoyed spending time at the family farm.

The family would like to give a special thanks to the doctors, nurses, and staff at CARTI and Coronary Care ICU nurses at Baptist Hospital for their exceptional care.

A memorial service will be held at 2:00 p.m. Thursday, December 14, at Second Baptist Church at 222 East 8th St in Little Rock.

In lieu of flowers, the family requests donations be made to CARTI or Second Baptist Church.

Cremation Arrangements are under the trusted care and direction of A Natural State Funeral Service, 2620 West Main Street, Jacksonville, Arkansas, 72076. 501-982-3400.