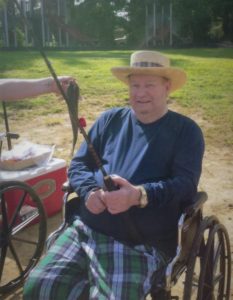 William Elmer Bill Biggs peacefully passed away on Wednesday, December 27, 2017 at the Greystone Nursing Home in Cabot, Arkansas.  William was born on July 18, 1928 as the oldest son of William Randal Biggs and Hattie May Prim Biggs.  William, or Bill as many knew him by, worked in farming, sales, grocery store management, and ended his work years at the John Deere Missco Implement in Blytheville.  For most of his life, he lived in Holland, Missouri with the exception of the past three years where he resided in Cabot.

William married Shirley Colleen Martin October 30, 1947.  They had two children, Carl and Pamela.  William and Shirley were devoted husband and wife for almost 48 years until her passing in October, 1995.  They were active members of the Samford Church of Christ where he served as a deacon and then as an elder.

William was an avid fisherman and it lead him to one of his favorite past times, feeding others.  He fed thousands of people fish, French fries, and hush puppies from the bootheel of Missouri to Arkansas, Mississippi, Texas, Kansas, and Tennessee.

He was also well known for his compassion to help strangers.  He stopped to help people who were stranded on the road or many who just showed up at his home asking for help.

Services will be held at the Samford Church of Christ in Steele, Missouri, Saturday, December 30, 2017. Visitation is scheduled to begin at 12 p.m. and the service will be held immediately following at 1 p.m. In lieu of flowers, the family asks that donations be made to the Children’s Homes Inc. in Paragould, Arkansas.