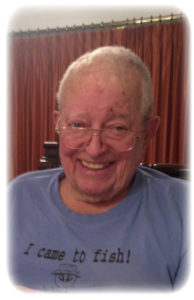 Harold Dean Johnson, 85 of North Little Rock, Arkansas passed from this life on Sunday, January 7, 2018. He was born on May 23, 1932 in Cave City, Arkansas to the late Orville H. and Thelma Johnson. Dean served in the United States Air force for over twenty years before retiring and later worked for and retired from HUD. He loved the outdoors, hunting, fishing and spending time with his grandchildren. Dean was a member of the Cedar Heights Baptist Church in North Little Rock.

He is also preceded in death by his brother Charles Johnson.  Dean is survived by his wife of 49 years, June Johnson; two children, Tamara Sobotka (Steve) and Jason Heath Johnson (Bridget); three grandchildren, M’Lynn, Brady, Justin; one great-grandchild and a host of other family and friends.