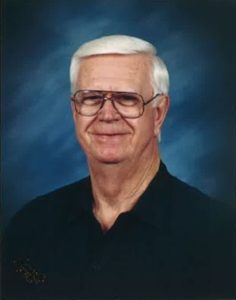 He is preceded in death by his parents, sister Ruth Burchfield Clark, brothers Bill Burchfield and Larry Burchfield.

Charlie attended Dermott High School, played football where he was nicknamed “Saddlehoss”, his team won the state championship in 1947.

Charlie was offered scholarships to University of Arkansas and University of Mississippi but he joined the United States Air Force. He was a Kroger Company store manager at the age of 20 then he began his career with Arkansas Farm Bureau on March 3, 1953 as an agent in Ashley County and was promoted to Agency Manager.  He accepted the position as District Sales Manager in the Southeast area of Arkansas, February 5, 1955.  He accepted the State Sales Manager, Vice President Sales, for the Mississippi Farm Bureau Mutual Insurance Co. on March 1, 1976. In 1993 Charlie retired and moved to Mt. Ida, Arkansas.  Charlie also served as a board member for the Montgomery County FB.