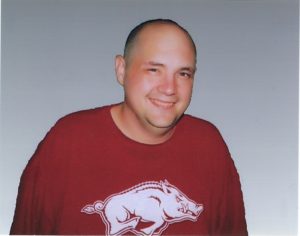 Jeffrey Glenn Alberson, age 45, passed away on February 9, 2018 at his home in Fayetteville, Arkansas.  He was born on October 20, 1972 in Little Rock, Arkansas. Jeffrey attended school in North Little Rock. He received his Bachelor’s degree from the University of Arkansas College of the Arts and Science in May 2004.  In August 2017 he received his Master’s Degree in English from Arkansas Tech University in Russellville, Arkansas.

Graveside services will be held at New Hope Cemetery, Lonoke, Arkansas at 11 A.M. on Friday, February 16, 2018.

In lieu of flowers memorials may be made to the Arkansas Diabetes Association in his honor. Arrangements by A Natural State Funeral Service, 2620 West Main Street, Jacksonville, Arkansas, 72076. 501-982-3400