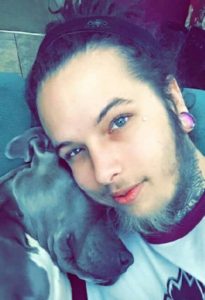 Kamron Allen Culpepper, 25 of Jacksonville, Arkansas, passed away in Los Angeles, California on January 23, 2018.  He was born in Little Rock, Arkansas on May 1, 1992.

Kamron leaves behind the love of his life his dog, Baby D.

Kamron was preceded in death by his grandparents, Billie Ray and Ginger Reece Culpepper.

Kamron was a traveler, an artist, a free spirit, and a great friend.  He never met a stranger and he had a crowd… an army… a mass… a collection of so many friends he loved and that truly loved him.

A time of visitation will be held on Friday, February 2 from 6 P.M. until 8 P.M. in the chapel at A Natural State Funeral Service, 2620 West Main Street, in Jacksonville.

Funeral Services will be held at 4 P.M. on Saturday, February 3rd at the funeral home.