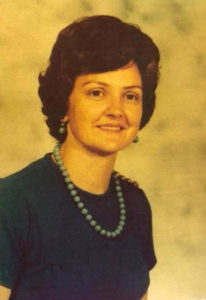 Wilma Dean Johnston-Gasch, age 78, passed away on Sunday, March 18, 2018.  She was born in Rison, Arkansas to the late William Johnston and Letha Blanche Clark-Johnston.

She was preceded in death by her parents, a son James Randell (Randy) Gasch, a brother and two sisters.

Wilma is survived by her daughter Cheryl Ann Gasch-Hestand; one granddaughter Kelly Nicole Hestand that she kept and spoiled from the moment she was born.  Her siblings Erma Jean Johnston of Jacksonville, Arkansas, Verna Mae Hunter of Warren, Arkansas, Charles Everett Johnston of Rosebud, Arkansas, Glenda Ann Roachell of Lonoke, Arkansas, Mattie Jane Cotton of Cabot, Arkansas and Deborah Kay Polk of Cabot, Arkansas.  She will be missed by the love of her life Robert F. Gasch that has been by her side.