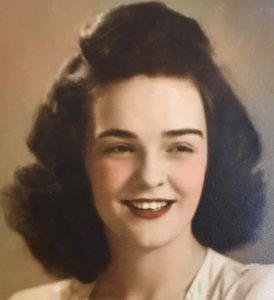 CONWAY  —  Wanda Faye Meador, a follower of Christ, passed away from this life on March 24, 2018. Born in Manila, Arkansas, on July 6, 1926, to the late Boyd Thomas Nichols and Hattie Hudson Nichols. Mrs. Meador was married to the sole love of her life, Dumas, Arkansas native, Roger Peyton Meador for 49 years until his death in 1997.

While still an infant, Mrs. Meador and family soon moved to Clarksville, Arkansas, where she grew up and lived until attending the University of Arkansas, in Fayetteville, Arkansas, earning a bachelor’s degree in journalism.

A trained violinist from childhood, she had the honor as a young woman of rehearsing and performing with the Arkansas Symphony. Her music naturally had to come into balance with social events of her day, such as election as the Johnson County Peach Festival Queen, which she fondly recalled as feeling as important [in the moment] as her musical and writing ambitions.

Preceding her in death were her parents, her loving and enduring husband, an older brother and a twin brother, both of whom passed away shortly after their births.

She is survived by her son, Mark Meador, her cherished grandchildren, granddaughter, Lt. Kristine Peyton (Meador) Groemping and two grandsons, Cameron Ashley Meador and Ryan Anthony Meador and her first (and closest) cousin, Ms. Nancy Gail Braden.  Also of notable importance to Mrs. Meador, was her beloved feline, Midnight Meador, now adopted through grace as Logan Midnight Meador.Mrs. Meador was a member of The First United Methodist Church, in Conway, Arkansas. She was among the earliest members of the Conway Junior Civic League and served in Conway as a Cub Scout Den Mother.  She did volunteer work at [now] Conway Regional Hospital, in addition to serving as a volunteer caregiver at the [then] Arkansas State Children’s Colony,  Later in life, she was proud to have inducted as a member of the Women’s City Club, and remained a member until her health posed too great an obstacle.

A 68-year resident of Conway, her volunteer activities in the community were too numerous to begin to list and—in her lifetime—were especially noteworthy considering the wonderful and storybook-like life she provided her son in his childhood years.  Given the amount of heart, love and mind applied (and steadily required, as a mother) her parental achievements alone, could be described only as somewhere between vast and mind-boggling.  Her husband was a traveling man and she all too frequently found herself executive-in-chief in all things, parenting.

Mrs. Meador graduated from Clarksville High School in 1943, graduated from the University of Arkansas in 1948 and worked for nearly two years at The College of the Ozarks newspaper office, where she met and married her husband.

In 1950, Mrs. Meador and husband moved to Conway living out their lives together.  Upon becoming a resident of Conway, Mrs. Meador was employed by (then Editor) Joe McGhee, to work as a writer for The Log Cabin Democrat newspaper.

In December 1955, Mrs. Meador adopted her only child, an event resulting in a loving, strong commitment to last the rest of her life.

Dearly loved by her friends, Mrs. Meador was kind-hearted to a fault, offering and sharing her life and time and belongings with those whose needs touched her heart.  She was a music lover, a lover of the arts in general, and, most probably one of the world’s greatest animal lovers.

Funeral services for immediate family only, held at 1:00 pm on Friday, March 30, 2018, at Crest Lawn Memorial Park Cemetery, in Conway, were precisely the close, simple gathering she had hoped for.  In lieu of flowers, donations may be made to the First United Methodist Church in Conway or to benefit the American Humane Society or the animal shelter of your choice.