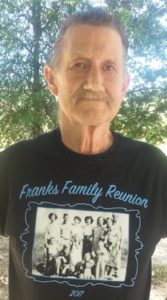 Billy Franks, 62, of Judsonia passed away on Thursday, June 28, 2018. He was born on January 21, 1956 to Bobby Franks and Janie ElMarie King-Schmitz in Martinez, California.

He was a loving family man, father and companion who was dedicated to his loved ones.  He loved and enjoyed telling stories, fishing, playing with his grandchildren and was an avid sports fan.  He loved his dogs Jake, Chiquita and Blackie; he also was tormented by his Cockatoo named Baby.

He is preceded in death by his father Bobby Franks and his sister Brenda Franks.

Memorial services will be held at a later date in California.