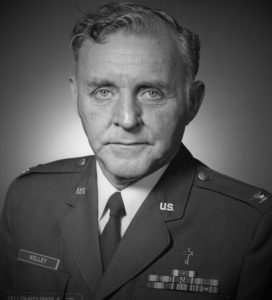 Chaplain (Col.) Benjamin F. Kelley, 90, died on June 9, 2018.  He was born on August 31, 1927, in Jamestown, Arkansas to Tinsley Vaughn Kelley and Margie Kelley. He is survived by his wife, Mary Cook, who he married on August 24, 1945. He is also survived by sons Benjamin Kelley, Jr., of Montgomery, Alabama, Bruce (Peggy) Kelley from Batesville, Arkansas, and John (Gretchen) Kelley from Cassopolis, Michigan, and his sister, Bettie Sue Sage of Tremont, Illinois. He was blessed with nine grandchildren and 21 great-grandchildren. He was predeceased by his parents, sisters Grace Kelley and Lavon Barnes, daughter in law Kathryn Kelley and two great-grandchildren, Kathryn and Micah Kelley.

Ben graduated from high school in Pascagoula, Mississippi, in 1945 and from Arkansas College in 1950. He graduated from the Central Baptist Seminary in Kansas City, Kansas, in 1956. He served as a Corpsman in the Navy at the end of World War II. He pastored in churches in Arkansas and Missouri from 1950 until he became an Air Force Chaplain in 1960. During his career he was stationed in Colorado, France, California, Korea, Nebraska, Iceland and Arkansas. At the time of his retirement he was the Staff Chaplain for the 15th Air Force Headquarters. His military decorations and awards included the Legion of Merit, Meritorious Service Medal, Air Force Commendation Medal, World War II Victory Medal and the Presidential Unit Citation. Ben served as a Volunteer Chaplain for the FBI in Little Rock for several years. He was also very active visiting people in the area hospitals and homes. He belonged to the First Baptist Church in Jacksonville and was a 32nd Degree Mason.

In lieu of flowers the family prefers donations be made to the First Baptist Church or a charity of your choice.

Arrangements are under the direction of A Natural State Funeral Service, 2620 West Main Street, Jacksonville, Arkansas, 72076.