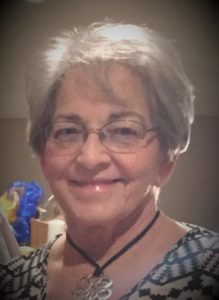 Phyllis Ann (Akin) Oblinger, 74, of North Little Rock, Arkansas passed away Saturday, June 23, 2018. Phyllis was born on March 4, 1944 in Warren, Arkansas to parents L.M. Akin and Virdie Akin Lipsmeyer. On July 11, 1964 she married the love of her life, Raymond J. Oblinger.  In two weeks, they would have celebrated 54 years of marriage.

Phyllis spent her life devoted to her family as a wife, mother, and nana.  The only thing she loved more than the Razorbacks were her grandkids.  When she was not with her grandkids, she was scrapbooking about them or engaged in one of her many other crafting hobbies. Phyllis thrived in social situations; she drew energy from being around friends and family.  She had an infectious smile and could always be found at the center of any celebration.

She was preceded in death by her parents Mr. and Mrs. L.M. Akin, her brother Rev. G. Coleman Akin, and her sister Patricia M. Daniel.

In lieu of flowers memorial may be made to the American Heart Association http://donatenow.heart.org